END_OF_DOCUMENT_TOKEN_TO_BE_REPLACED

One School Beats the Odds in Chicago Public Schools

"Our greatest glory is not in never failing, but in rising up every time we fail."
—Ralph Waldo Emerson

Painted in bright blue across the wall of a stairwell, this quote reminds the students at Cesar E. Chavez Multicultural Academic Center about the most important lesson in learning and academic growth: to rise up after a struggle. 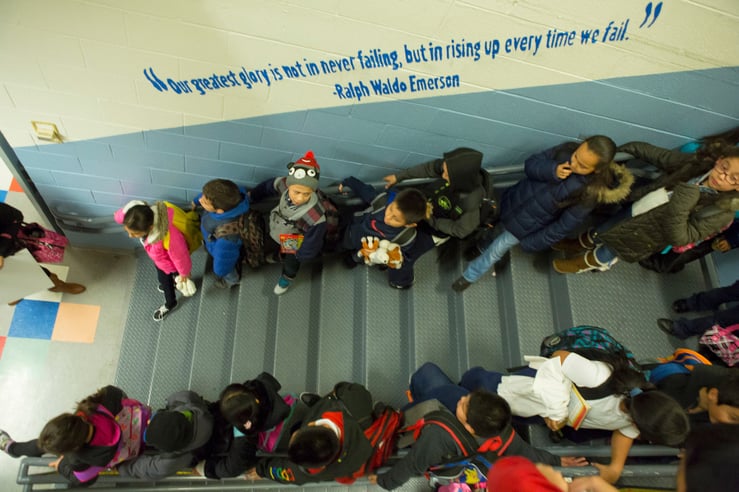 Located in Chicago’s Back of the Yards, an urban neighborhood historically known for housing the stockyards that fueled the meatpacking industry in the twentieth century, Chavez elementary serves a working-class community plagued by gang violence. The K-8 school, serving the predominantly immigrant families in the surrounding area, is comprised of a student population that is nearly 50% ELL and 98% low-income.

Starting the Change the District Wants to See

In addition to astounding achievement results, the school has earned the highest School Quality Ranking of 1+ by Chicago Public Schools (CPS) for the last three years. No small feat in a district plagued by reports of leadership scandals, funding challenges and low achievement.

Principal Barton Dassinger has played a key role in leading students and teachers as well as families in the community to take ownership and pride in this school, which he has called a “21st Century community learning center.” Dassinger is rated one of the best principals in Chicago, regularly hosting tours of his campus for other educators, philanthropists and government officials, and his efforts were recently profiled in the Crain's Chicago Business series, “Five Big Ideas for Chicago’s Troubled Schools.”

According to Principal Dassinger, his first step was simply to get students to come to school, noting University of Chicago research that prioritizes school attendance as more important than test scores in preparing students for high school and college. “We need to build a culture focused on coming to school daily,” which he accomplishes by involving families and giving acknowledgement to students who show up despite the serious challenges in the community.

The result: attendance rates at Chavez have improved every year for the last five years, and are consistently higher than the district average. But this was just the start.

The next steps involved instituting innovative programs, such as partnerships that provide students and families with access to food, tutoring and counseling; an expanded school day; data-driven practices; and instructional tools on the forefront of learning, including ST Math.

In 2010, Principal Dassinger piloted the ST Math instructional software in one classroom. After seeing promising results in student engagement through the game-based math program as well as in student achievement, he expanded the program to all grades, with the goal of building a culture of math success throughout the school.

“Our students enjoy ST Math,” says Dassinger, “and are able to make connections between their independent work and their teachers’ lessons, enabling them to reach their academic potential.”

Having been a lead teacher and then a principal intern prior to assuming his leadership role at the school, Dassinger understands the importance of teacher buy-in for the success of a learning program. He gave teachers the opportunity to explore ST Math and decide for themselves how to move forward.

“Once teachers saw the impact ST Math had on their students’ learning and test scores,” says Dassinger, “They incorporated the games into their classroom teaching on their own.”

Teachers can use ST Math reports to improve personalized classroom instruction. “A program is only as good as the people using it,” he says. And ST Math supports teachers by providing student data that informs them on what adjustments to make in instruction based on the analysis.

With attendance up, innovative programming and data-driven instructional practices, Chavez sees at least one-third of the graduating 8th graders accepted to one of the top high schools in Chicago each year. Nearly all of the rest are accepted to high-performing high schools in the city. The results are clear: Chavez students are more than capable of rising up in the midst of challenge.

Brienne is a Director of Education Success and former Elementary School Teacher. She speaks on behalf of the MIND Research Institute across the country to illuminate the power and necessity of neuroscience-based, interactive math software that is designed to teach all students how math really works.

Columbia Public Schools: The Making of a Math Culture