END_OF_DOCUMENT_TOKEN_TO_BE_REPLACED

Students of All Levels Learn the Value of Productive Struggle

"The kids don’t realize they’re doing math, they think they’re playing a game. It keeps them motivated to keep trying because it doesn’t look like math the way they’re used to seeing math."

“One aspect that we really like about ST Math was the non-linguistic approach,” says Matt Blundin, ACPS’ Lead Instructional Coach for Mathematics.

Since ST Math does not rely on language, Bludin felt the program made sense for this sprawling Virginia school district that encompasses suburbs to farmlands. “We have a rising population of students struggling with the English language and ST Math is a way for any child to be involved with learning math through understanding concepts and problem-solving.”

At Woodbrook Elementary School, a Title 1 school with a high ELL population, ST Math has been a key component of math block instruction for four years, according to Principal Lisa Molinaro. And she believes ST Math is the reason she’s seen an increase in her students’ probability, statistics, and geometry skills over the last few years.

In fact, a broader analysis of Virginia Standards of Learning (VSOL) results shows that Albemarle schools using ST Math for three years are outpacing the rest of the state in math achievement. 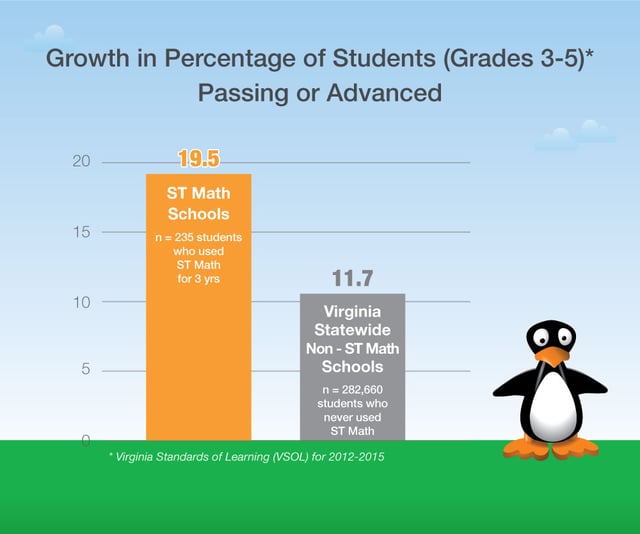 “The visual representation of mathematical processes forces students to think deeply about numbers and number sense,” Molinaro says. “Students will work harder, much harder, at solving the problems with ST Math than they would with paper-pencil.”

High Achievers Learn the Value of Productive Struggle in Math

The gifted and talented students at Virginia Murray Elementary also find themselves working harder at solving problems in ST Math – sometimes to their own chagrin.

“Because ST Math doesn’t give you directions, you have to be comfortable with failing as you struggle to figure things out,” says Mark Green, Principal of Virginia Murray, which has been using ST Math for three years. “High achievers sometimes find that challenging.”

A case in point, one gifted student, after encountering initial challenges, went so far as to describe JiJi, the animated penguin of the ST Math games, as his nemesis. Green describes the student as not used to being wrong and having to overcome his fixed mindset and challenge himself to overcome his fear of making a mistake.

ST Math has put a spotlight on the value of productive struggle--the active and persistent method of learning through failure.  “We see ST Math as a continuum resource for all students, including struggling learners as well as high achievers who are not used to struggling,” says Green. “The program helps us understand them better as learners. Not just in math, but overall.”

Brienne is a Director of Education Success and former Elementary School Teacher. She speaks on behalf of the MIND Research Institute across the country to illuminate the power and necessity of neuroscience-based, interactive math software that is designed to teach all students how math really works.