END_OF_DOCUMENT_TOKEN_TO_BE_REPLACED

The Role of Parents and Teachers in Game-based Learning 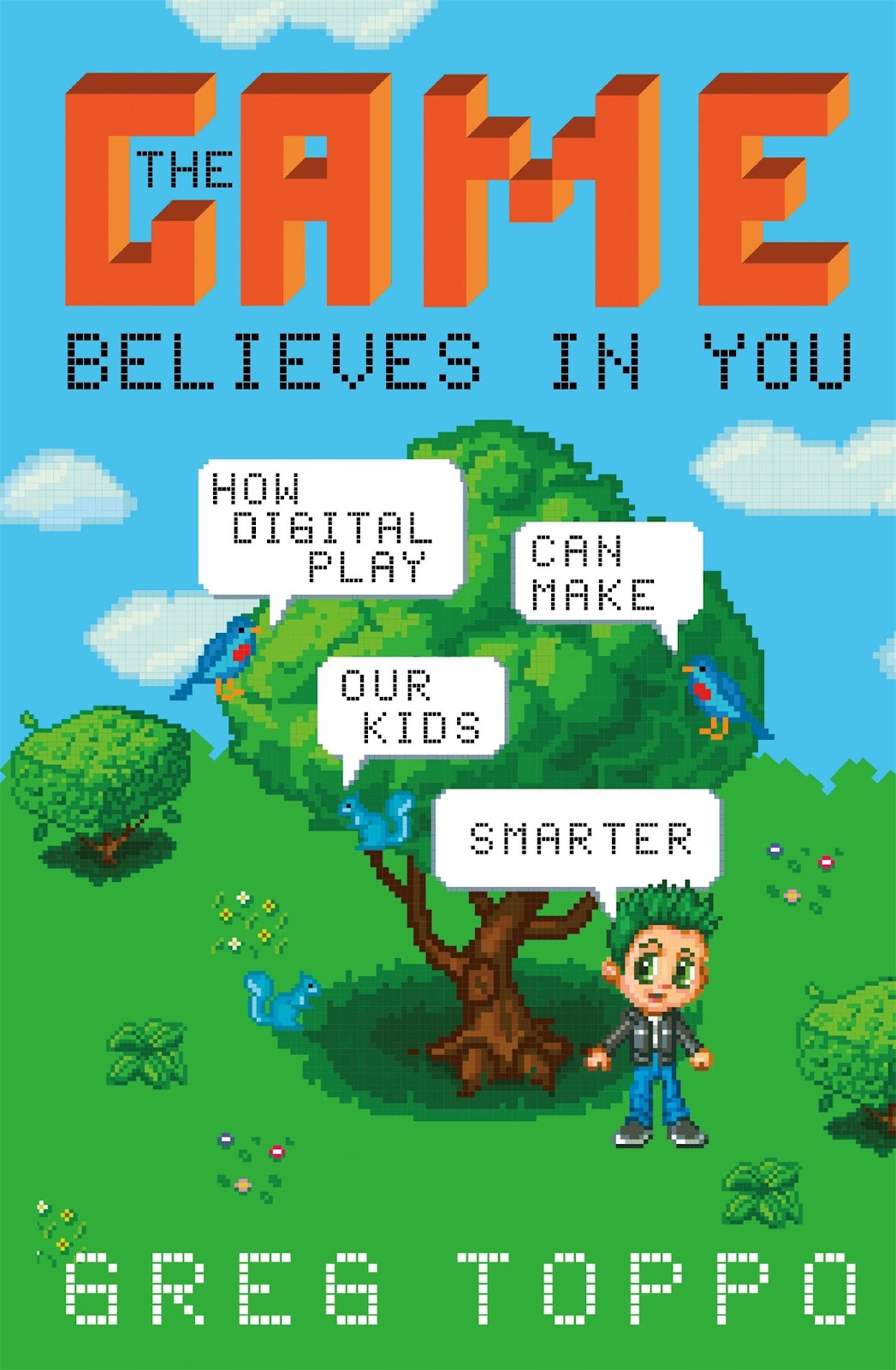 In our final installment of the series, reporter and author Greg Toppo continues the discussion with ST Math creator Matthew Peterson about game-based learning. In his new book, The Game Believes in You, Toppo interviews Peterson and other leaders in the educational game field for an in-depth look at the potential of game-based learning to be, yes, a game-changer in education. Peterson and Toppo recently discussed some of their biggest personal revelations about games, and what they see as the role of teachers and parents in educational gaming.

Q. You’re both parents, but what’s the biggest thing you’ve learned about children from your day job?

GT: In reporting for this this book, I realized two things: how social kids are – you don’t realize it until you watch kids playing games – and how much they rely on their peers for kind of a reality check or an audit.

Another thing, reporting on this book really forced me to look at life from the point of view of a kid again and think about what it’s like to have to learn something new and totally unfamiliar and totally soul-crushing, sometimes. And then try to figure out ways to make it not necessarily more fun, but more humane. That’s been a revelation for me.

MP: I’m constantly developing new games and just this this weekend, I was completely humbled by the fact that my three-year-old was kicking my butt at one game we’re working on to build working memory. With these games that tap into lower-level, raw cognitive abilities, sometimes the kids are better than you. It’s a great experience. Games are one of the few places where an adult can actually be beaten by a three-year-old.

GT: One of the things kids help me realize is that they spend so much of their day inside the magic circle that it doesn’t become interesting to them anymore. But adults spend so much of our time outside of the magic circle, that when we are in it, it seems really special. That was something that didn’t occur to me until I spent so much time with kids.

MP: You immerse yourself into this new world and that helps facilitate you to push yourself to new limits or creative flow. The immersive aspect is where the magic circle comes in.

GT: If there’s a way that we can become immersed immediately, that’s a plus. I’ve been thinking a lot about games and how it is that we get immersed and stay immersed. Technologically I think we’re always trying to think about ways to get immersed and stay immersed. Forty or fifty years ago when you watched a football game on TV, it wasn’t very TV-friendly thing because it took so long between plays and people would lose interest. But when you added instant replay, you could play it back three or four times and really analyze every little detail of what’s involved. That’s a way of almost making the magic circle psychedelic.

MP: One thing that [helps], is if you haven’t played a game a lot, you don’t have perceptual schemas of how that game works, so you don’t get to see things that an expert commentator would be able to see. So, I don’t bowl, but if someone threw the bowling ball, I wouldn’t be able to tell you how good it was and where every pin went because I don’t have a schema for bowling. But a good bowler would be able to see that right away. So what you’re saying is that instant replays and things like that allow people who don’t have that schema to get into the magic circle. That’s really important to what we’re doing with Spatial Temporal Math (ST Math) is we’re trying to get more people to enter into this world that normally you need a really rich schema to appreciate, but we’re able to use visualizations and other techniques to start building that schema, but also let you have access to it earlier on.

GT: I think that’s right. It’s so funny because almost every time I talk about games I find myself using that word, access. And it’s not really a word I used a lot in the book, but the more I thought about it, and the more people asked me what’s so great about games, that word access came up in my mind again and again. Access to the material, access to understanding it. It kind of snuck up on me. 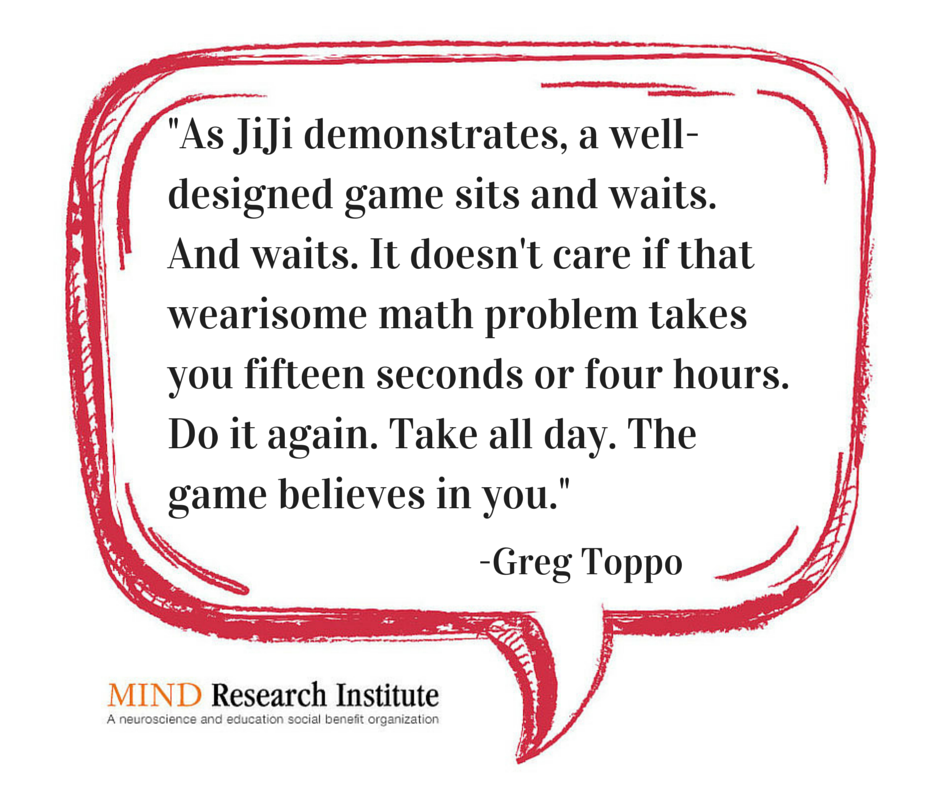 GT: I hope that the parent doesn’t use educational games as a babysitter, where the game allows the parent to walk away. What I would hope is that the game is so interesting and so engaging and the kid is so excited about it and wants to share it that the parents become learners too.

MP: From the ST Math perspective, the teacher is critical. Our games are meant to be engaged in discussions with the teacher. So we design our games with that in mind. Still, some teachers will take students to a lab, stick them them on JiJi and go do other stuff during that time, and that’s really not ideal. There are so many opportunities to be making rich interactions with students at that time.

GT: One of the things I remember very vividly the first time I encountered ST Math was at the Rocketship school in San Jose, and one of the things the people at Rocketship have always been very keyed into is asking, “What do computers do well?” and “What do people do well?” And that’s a question you need to keep asking. If I’m a teacher and this game is doing a great job in teaching these concepts, what is my role going to be in the next 30 minutes? Not, “I’m going to go take a coffee break,” but “What can I do to make this better?” And that’s why teachers get into this, to make a difference. So that has the potential to not only be a great thing a teacher can do, but something satisfying that a teacher can do. If I’m a teacher able to rely on ST Math, think about what that would free me to be able to do. I’d think that would be really marvelous.

MP: The Rocketship example is great because they started out thinking that the computer would do a whole bunch of computer-guided instruction and then teacher would do their own instruction. But then they changed their model, realizing they could get much better results if they integrate it so that the teacher is making connections to what the student is encountering on the computer and tying it together. ST Math was, from our perspective at least, a catalyst for that.

We also find that people talk about teachers needing better content knowledge, and that’s absolutely true. But what we’re finding is that even teachers who are not high on content-knowledge spectrum, if they learn how to engage students with digital content that has rich explanations and depth of learning, those teachers can rise to the occasion. So we’re seeing it as a really interesting bridge.