END_OF_DOCUMENT_TOKEN_TO_BE_REPLACED

I’ve written about board games here on the blog before, as they are a passion of mine. I play board games on a frequent basis (my 650 square foot apartment is also home to 650+ games), and I have edited the rules of several board games. One of the reasons I love working at MIND is because our work combines two things I am very passionate about: education and gaming.

One of the best tools we have to addressing both of those challenges is the use of story.

Stories can be powerful tools that can facilitate deeper learning by providing an emotional connection to the subject matter.

When it comes to math, however, stories are often used as just a vehicle to get students to a math problem. The math is just an add-on to the story, and that meaningful connection to deeper learning is never realized. Because of this, the student’s relationship to the math never changes. Their engagement ends when the story is over.

A similar pattern can be seen in board game design. Many board games use narrative elements around the periphery of a game’s mechanics. It’s wonderful when the mechanics make sense with the theme and enhance the story, but unfortunately, meaningful connection between the two is rare.

I hear tabletop gamers often say that the theme and story attracted them to a certain game, but they haven’t played it yet because they are overwhelmed by having to read the rules and learn a new game. Just like memorizing mathematical algorithms, memorizing rules by reading or listening to them not only isn’t fun, it’s not conductive to deep understanding.

But what if we used narrative to move beyond just setting up a math problem? And what if the story we told was so woven into the mechanics of a game that they were one and the same?

My colleague Brandon Smith, Lead Mathematician at MIND Research Institute, has been exploring these two challenges as they pertain to a series of math board games he had been designing, testing and iterating for several years. 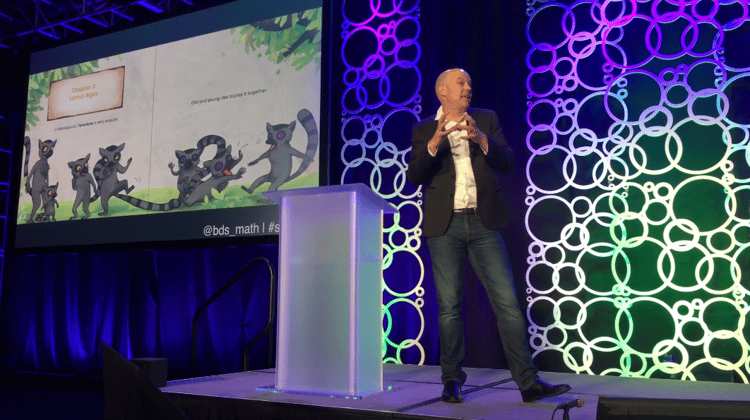 Looking at the research MIND’s co-founder and chief research and development officer was doing around the four neural subsystems of deeper learning, the episodic subsystem stood out.

Our brains are wired to remember stories. Why not use stories to build the schema for how to play the games and circumvent needing a rulebook entirely?

If we want students to go into the world and solve challenging problems, we need them to choose to engage with math.

We can use words to share stories about math that inspire students and excite their imaginations. Stories that show how math connects us and the world we live in. Stories that not only instill in students a hunger to learn more, but to share what they learn--with classmates, teachers and parents.

Brandon Smith shared what we mean by this at the ISTE 2018 conference last week.

He brought up the challenges he sees in creating a culture that includes engaging experiences with mathematics.

Math is a foundation for the other STEM fields (science, technology, engineering, and math), yet less than half of students are proficient in math. How can we allow students to experience and play with math?

Games Can Take You Deeper into Rigorous Math

We want to create games that not only enforce mathematical practice standards, but engage players in rigorous mathematics, and take you deeper into math with non-routine and tantalizingly tricky problems.

Thanks to a grant from our partner Rockwell Automation, Brandon and a small number of our team were able to dedicate time to testing and developing board games that have this level of impact on learning.

Introducing MathMINDs Games: South of the Sahara. MIND created math storybook games to give students, teachers and families a completely new way to engage with math. Each story brings together historical facts, ancient gameplay, mathematics, and the world around us to create a highly connected experience.

The stories are designed to build a framework for playing math games, based on historical facts, ancient gameplay, and mathematics from the world around us. As students read and play along, they are instilled with a hunger to learn more, and inspired to share what they learn with classmates, teachers and parents.

Listen to Brandon Smith’s Ignite session from ISTE below to hear more about how we created the games:

We are so excited to share more about MathMINDs Games: South of the Sahara on our website!

Three I's to Mathematize Anything