END_OF_DOCUMENT_TOKEN_TO_BE_REPLACED

ST Math Provided a Challenge for My Son, and a Mission for Myself

When we decided last year to relocate from New York City to Orange County, CA, I felt a rush of conflicting emotions. “Hooray, no more winter! Hooray, Disneyland! Boo, traffic.” And then, most critically, “Oh gosh, what are we going to do about Dante?”

Our then 5-year-old son had just been accepted into one of the citywide--and hyper-competitive--gifted and talented (G&T) programs. He had scored a thrilling (and slightly terrifying) 99th percentile on both the Otis-Lennon School Ability Test® (OLSAT), which measures a child's ability to comprehend and reason with information communicated through spoken language, and the Naglieri Nonverbal Ability Test® (NNAT), which measures reasoning and problem solving without spoken language.

I found myself frantically googling gifted options in California public schools, and learned that philosophies differ about how and when to test kids. Our New York test results would not be transferable. He would not “pre-qualify.” And we’d be back to square one. I had heard wonderful things about the school district we were moving into, but remained very nervous that he would lose momentum within a less challenging academic environment. 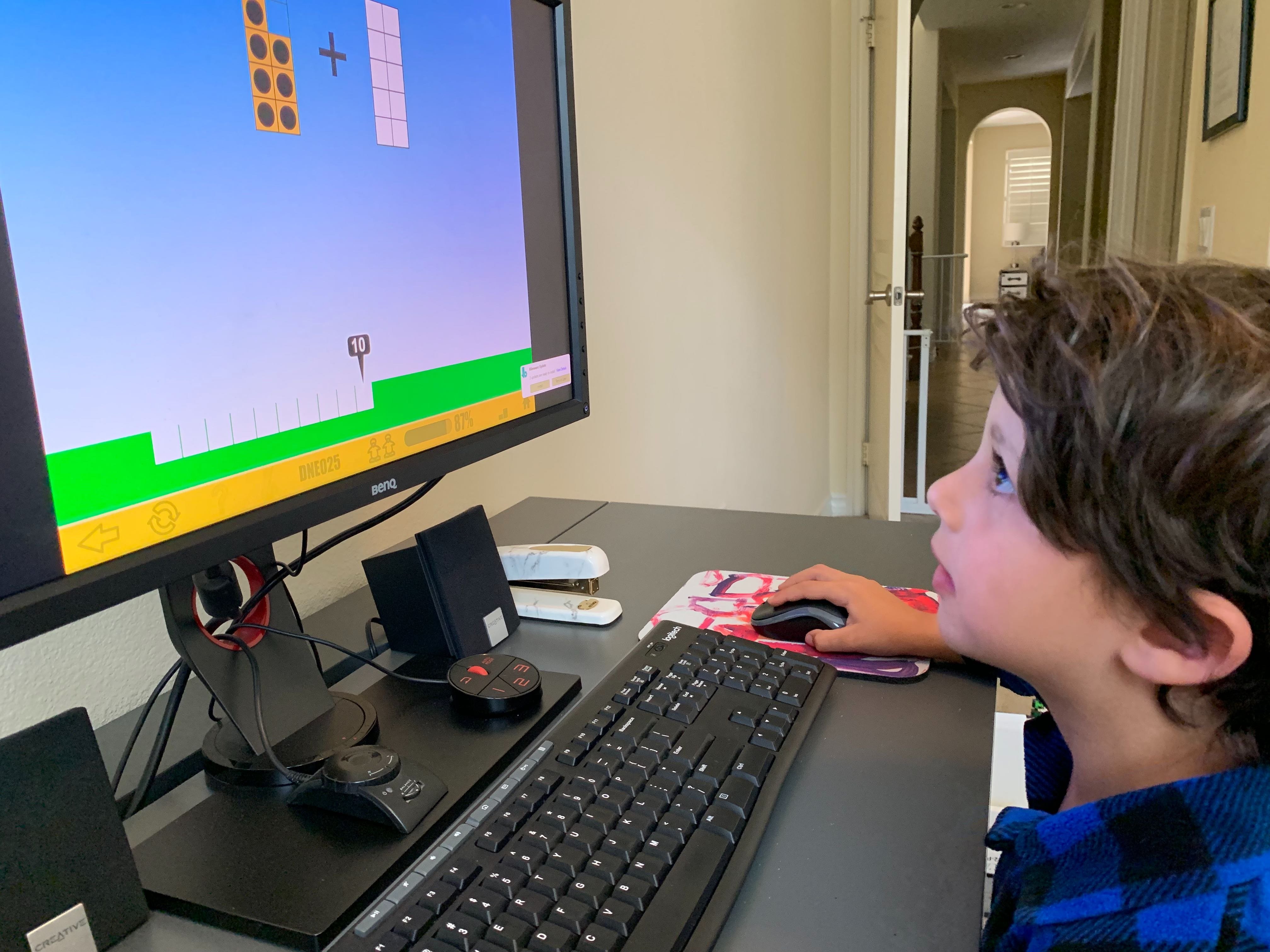 Right after he started at his new kindergarten, he came home talking all about someone named JiJi. I was confused, since I thought I knew all of his new friends. “Duh, mom,” he said, “JiJi is a penguin.”

Amazingly, this did not clarify the matter for me.

Dante logged in to a program called ST Math and showed me more. At first, I was confused by the lack of instructions, and wondered how he would know what to do. Then I saw that he was able to intuit how to solve the problem, and build on what he’d learned to apply his reasoning to the next problem. How I wished I had been exposed to a similar way of learning and building deep understanding when I was his age!

It was even more exciting to realize that Dante was truly being challenged by ST Math. He wasn’t just cranking out simple problems, selecting from multiple choices, or memorizing things - he was thinking and applying his knowledge, all while having fun and getting JiJi to cross the screen. And even better, ST Math was building his patience, perseverance, and capacity to think through challenging situations - social-emotional aspects that I have seen him improve upon in other areas of his life as well. He doesn’t give up as easily now when faced with a challenge, whether it’s a difficult word he hasn’t read aloud before or a new robotics building set.

Of course from my perspective it’s wonderful that ST Math works for gifted children, but it’s energizing to think about how ST Math's visual approach makes the program accessible to all learners. Studies like this one have shown ST Math provides equitable access and equitable growth for students of all levels: 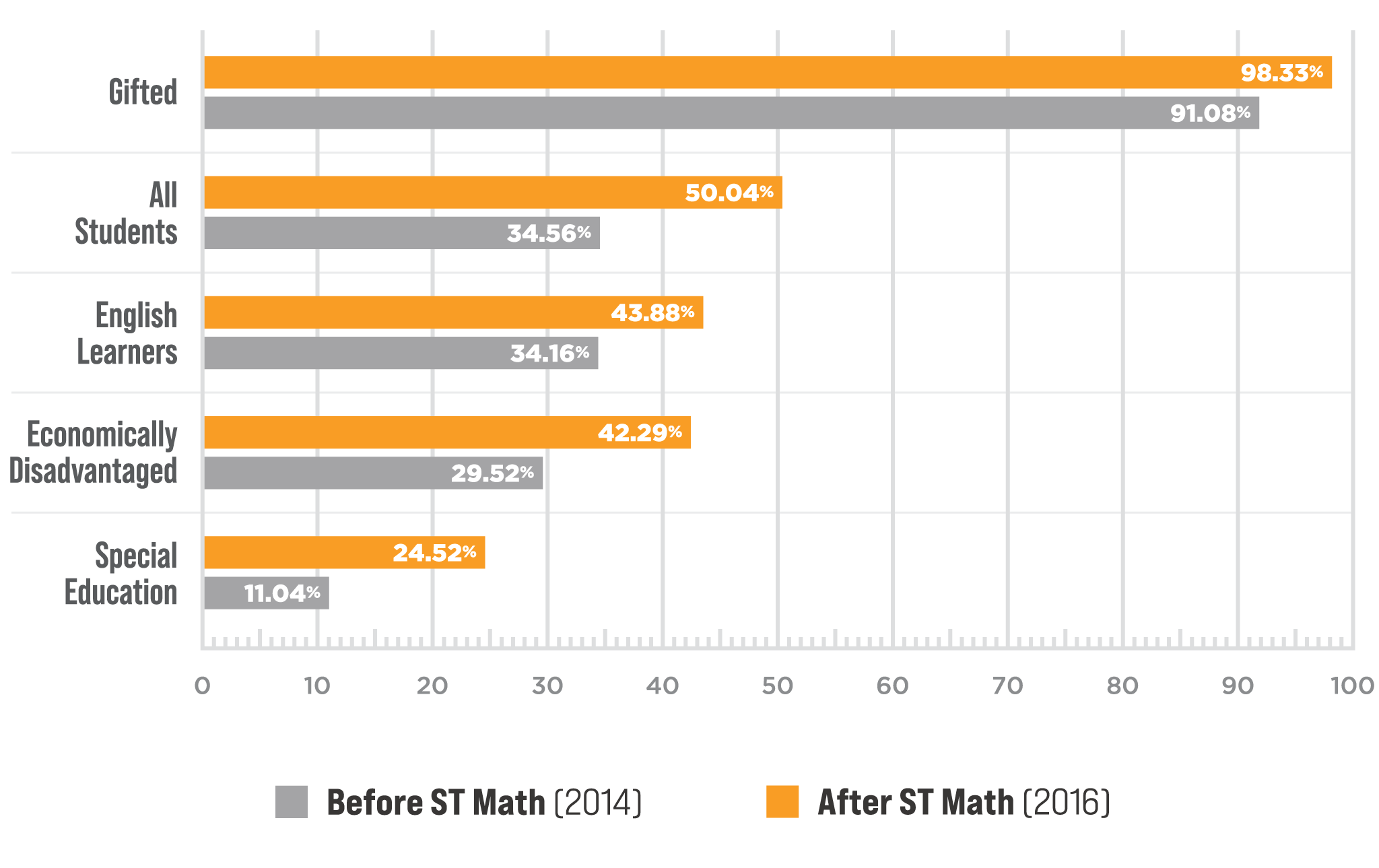 Percent of students satisfactory or advanced in grades 3-5, 2016. See the full report.

A Chance to Take Up the Mission


A few months after we moved, I saw a job listing for MIND Research Institute, the makers of ST Math. I knew right away I had to be a part of the organization’s mission to help all children become mathematically equipped to solve the world’s most challenging problems. Though I am now delighted to be a MIND colleague and part of this exciting and brilliant team, I will always be an ST Math parent first and foremost! I can’t wait until my younger son, age two, is old enough to start the Pre-K program. For now, he would probably try to eat the computer.

Principal for a Day at Jackson Elementary