END_OF_DOCUMENT_TOKEN_TO_BE_REPLACED

Finding the Math in Everyday Life with Sports

April is Math Awareness Month! This April, we would like to challenge you to see the math in everyday life. Diverse hobbies like sports, yoga, music, baking, designing, gardening and much more all incorporate math and problem-solving in multiple ways!

We asked a few of our MIND colleagues to answer this question: How has math surprised you in your everyday life and hobbies? ...and the answers showcase how math really is all around us!

Racquetball is a fast paced game played with a racquet and a bouncy blue ball in an enclosed 20 by 40 ft. room. I wish I could tell you that when I play racquetball I calculate the trajectory of the ball and the angle that the ball must take to pass my opponent, but really that is a skill learned by experience. Instead, I’ll show you how I used math in this real life situation as part of a racquetball tournament.

A local tournament director was having a problem figuring out the brackets for single elimination tournaments when the number of players was not a power of two. Think of the NCAA basketball tournament. You start with 64 teams and after each round half of the teams are eliminated until you get down to the final four, the two finalists and finally, the national champion. But let’s say 93 players signed up for the racquetball tournament. How many players would play in the round of 128 and how many get a bye into the round of 64? 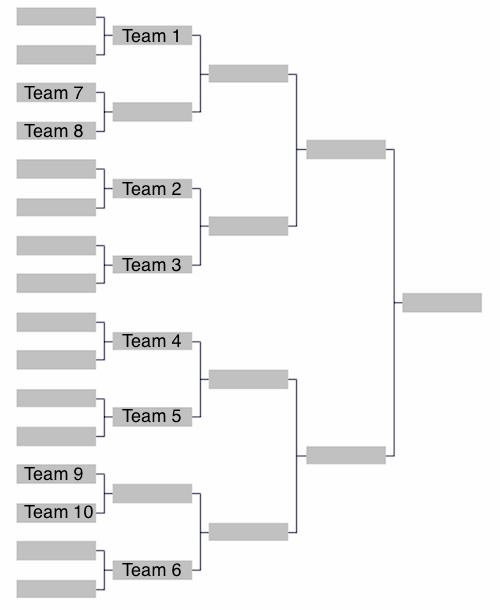 The tournament director needed a formula, as there were several divisions in the tournament and he had to calculate brackets for all of them. The strategy I took was to look at a simple example and then generalize a formula that would work with more complicated cases. A simple example would be 10 players in a tournament. The second round would need to have 8 players since it’s the power of 2 that is closest to 10 and is less than 10. Some of the 10 players would play in the first round and some would get a bye into the second round. In this case it’s easy to visualize that you need 4 players to play in the first round and that the remaining 6 players get a bye into the next round. The 2 winners in the first round would join the remaining 6 players for a total of 8 players in the next round.

Now we can answer the question posed earlier. If you have 93 players in a tournament, the number of players in the first round is (93 - 64) * 2 = 58. So 58 players in the first round and 35 get a bye into the second round.  I shared my formula with the tournament director and he was able to plug in the numbers and calculate the brackets for all the divisions. Unfortunately I did not win the tournament, but I did make it to the final four in my division and that was a lot of fun!


Adding Gender to the Equation in Volleyball

By: Abigail Daniels, Director of Communications 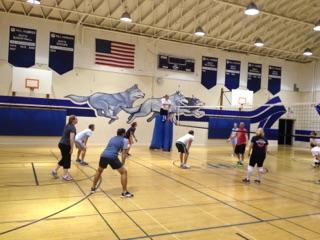 When coaches are figuring out their lineup before a game, they open up their math books.

No, wait. They don’t. They grab a dry erase marker and start putting X’s and O’s on a whiteboard. Which is what I recently did as team captain of my co-ed volleyball team.

I had been playing in a women’s indoor (6 player) league but had recently gotten “volunteered” by another female teammate to start a co-ed team. It all went along swimmingly until I was introduced to some of the rules that come along with playing in a co-ed league:

Suddenly, putting together a line up became overtly mathematical!

So I started visualizing the rotations. We’ll want to start with 2 men in front, because – and I hate to admit it – men seem to be able to jump higher in our league and are used to hitting on a men’s regulation net height. Our setter, Amy, should start in the back row so that we have three hitters in the starting rotation. Adam is a strong middle blocker, so let’s put him left front, to switch with Steve, our left side (power) hitter, who we’ll start at right front. That means that Abby has to be between Steve and Adam, because as you’ll recall, Debbie can’t be next to Steve. This puts Jose at middle back and Debbie at left back.

So we’re good, right? Well, not really. Just like in a math problem, I want to check my solution to see if it will work later in the pattern.

Abby typically plays opposite (or “back-up” to) the setter (if Amy is right back, Abby is right front; if Amy’s middle back, Abby is middle front, etc.). But she can’t if we have a female setter, because remember we have to be boy-girl-boy-girl-boy-girl; if Abby was opposite the rotation would be Abby-Adam-Steve…whoops! What this means is someone will need to play back-up setter when both Abby and Amy are back row.

Now we’re keeping track of variables in addition to patterns. And then there is the location of the players when we’re receiving the serve. Amy will be unavailable to pass during all rotations because she’s got to get to the net to be ready to set. This means during 3 rotations, when she’s back row, we need to pull a front row player to pass in the back of the court. And, we’ve got to remember who their “opposite” is so that we don’t get penalized by the referee for being out of rotation. But the probability of referee calls warrants a whole other blog…

How has math surprised YOU in your everyday life?

Finding the Math in Everyday Life