END_OF_DOCUMENT_TOKEN_TO_BE_REPLACED

Finding the Math in Everyday Life

April is Math Awareness Month! This April, we would like to challenge you to see the math in everyday life. Diverse hobbies like dance, sports, music, crafting, designing, gardening and much more all incorporate math and problem-solving in multiple ways!

We asked a few of our MIND colleagues to answer this question: How has math surprised you in your everyday life and hobbies? ...and the answers showcase how math really is all around us!

Pi Day of the Century

3.14.15 was Pi Day! Not just any Pi Day, but the one that only comes around once a century! I had to do something to celebrate. But just eating a pie seemed so passive. What does eating a sugary wedge have anything to do with this fascinating number? Pi is the ratio between a circle’s circumference and its diameter - any and all circles. I wanted to experience and interact with this number on this special day.

So I decided to bake a pie. 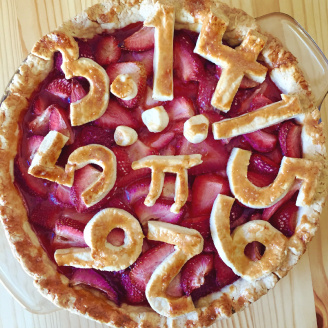 Open any math textbook, and we all know that there is a lot of math involved in cooking and baking. I measured ingredients. I one-and-a-halved the crust recipe in order to have a little more dough in case I messed up. But in making this pie, I realized there was a lot more math to appreciate (that they don’t teach you in school) hidden in this pie, and pi itself was everywhere! As I pinched the crust around the pie’s circumference, I understood that this distance was 3-and-a-little-more times longer than the distance across it. And the little dots I cut out for the decimal and ellipses…they contained this same ratio of pi!

I wanted the top crust to be the digits of pi spiraling around. So the top of the numbers had to align with the outermost circumference, but the bottom of the numbers would be aligned to a totally different, smaller circle. How does that affect the shape of the numbers? Do I taper them at the bottom so they’ll fit? Or should they overlap? Or is there an optimum height and width of the numbers? At what angle should each number be oriented? These considerations involved the measurements of invisible concentric circles within the pie that all had one thing in common – the ratio of pi!


Seeing the Angles in Yoga
By: Angela Bertolini, Sr. Recruiter

When I was growing up my biggest challenge in school was math. I was very social and loved reading and writing, but math classes never seemed to allow for real interaction with my classmates.

Little did I know about all the interesting discoveries in math that lay ahead of me. Working at MIND Research Institute has made me much more aware of how math is all around me in my daily life.

I now see how math is part of my favorite hobby, yoga. I’m often surprised at how my new awareness of math has helped me become better at yoga and enjoy it even more. For example, the side-plank yoga pose illustrates the concept of opposite angles. In the plough pose your legs create an acute angle with the ground, an angle that is less than 90 degrees. One of my favorites is the cobra pose. When I am in this pose and I look over at my neighbor to see if I am doing it correctly, I see an obtuse angle created by the spine.

I now find mathematics to be amazing! I am an observer by nature, and now I am able to observe that math is as much an art as it is a science, and that enhances my life. It is inspiring to say the least!


How has math surprised YOU in your everyday life and hobbies? Share with us on social media!

How I Profit from My Nonprofit Career

Finding the Math in Everyday Life with Sports