END_OF_DOCUMENT_TOKEN_TO_BE_REPLACED

Life at MIND: Another Boo-tiful Halloween Together!

Another year, another spooky Halloween at MIND Research Institute! This year, the Irvine office took Halloween to the next level—Halloween squared!

We celebrated Halloween all month long by BOO-ing fellow employees. What is BOO-ing, you ask? It’s a bit of a Secret Santa…if Santa were a zombie and anonymously left only spooky gifts! 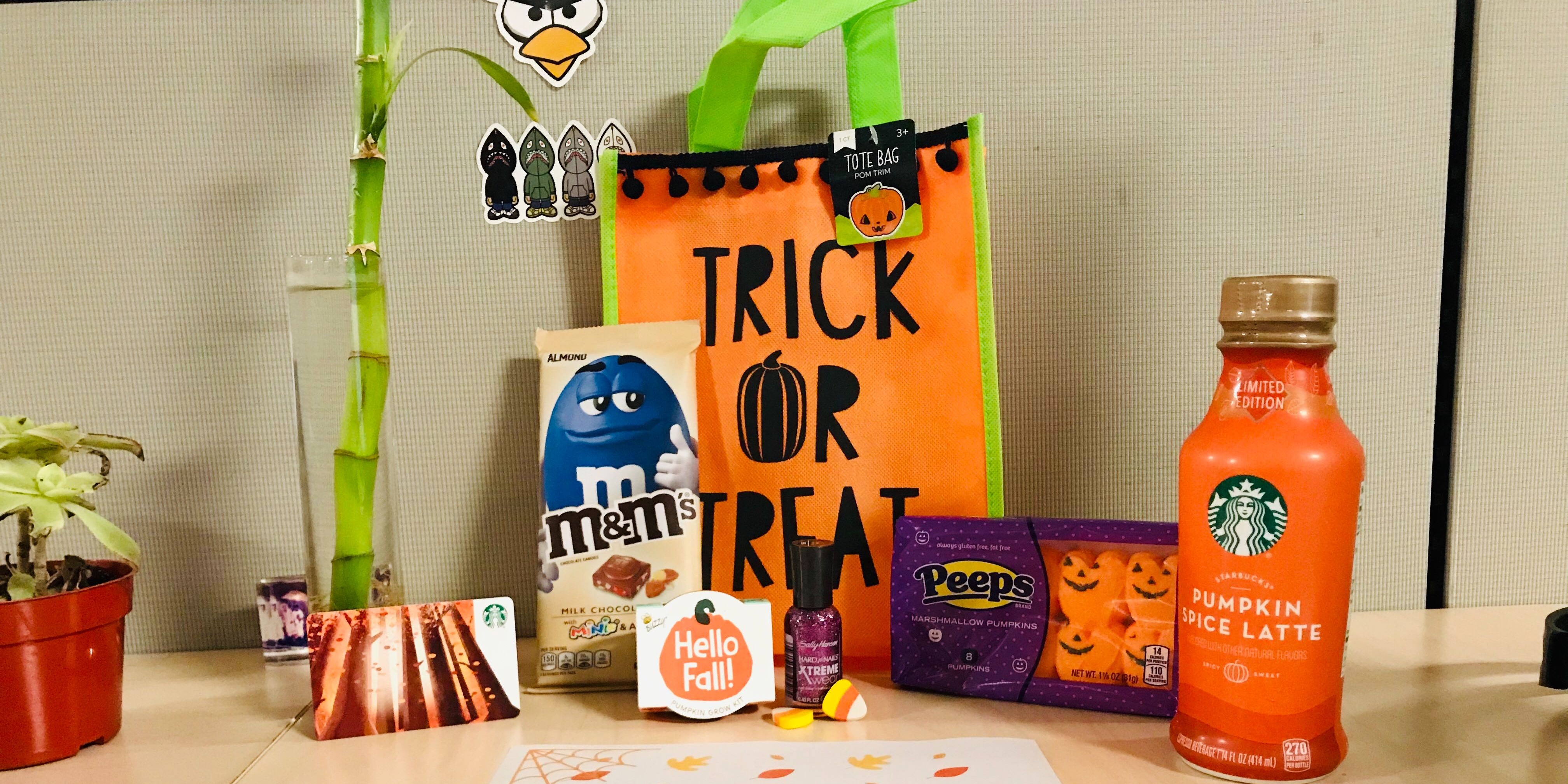 If you had been BOO’d, you would arrive at your desk to find Halloween goodies (candy, decorations, and autumnal wonderment), along with a poem and instructions on how to become a BOO-er for two other fellow employees! We passed the spirit of Halloween on to each other, and as the BOOs spread, so did the joy and excitement! The entire office was decked out with cobwebs, lights, and hanging ghouls and goblins.

We also had our fill of treats. It was been such a joy to see the spookiness spread, and to watch on Slack (our organization's instant messaging platform) as each person who had been BOO’d shared pictures of how their anonymous BOO-er made their day!

Personally, my BOO decorated my cube with purple and orange lights, as well as a banner. I was also treated to spiced cider hand soap and some delicious fresh-pressed apple cider. 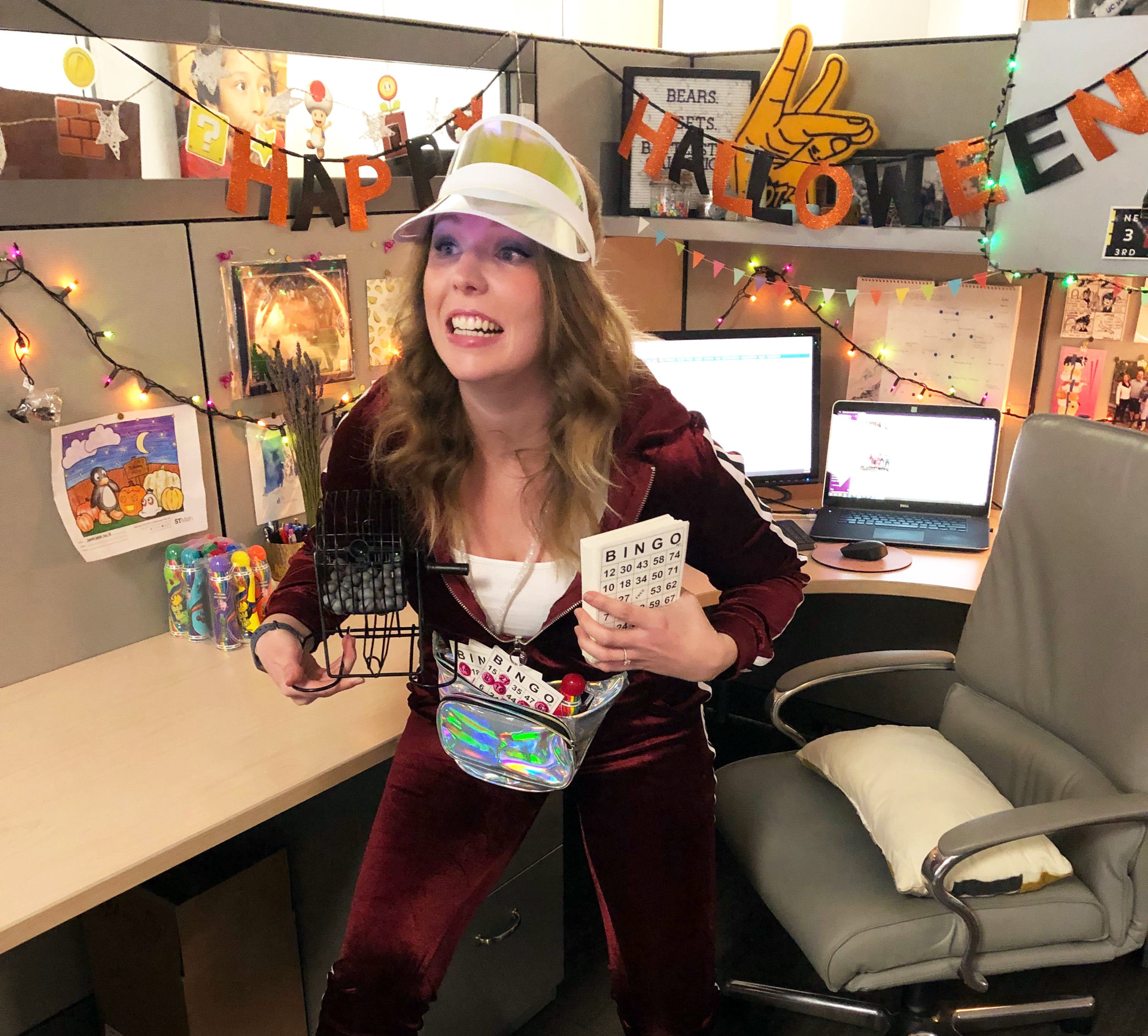 Bingo Genna (my costume) with my decorated cubicle, thanks to my BOO!

The week of Halloween, I came into the office to find a large table filled with goodies and decorating supplies. A large banner detailed that we would be having a monster creating contest using cupcakes, and the goodies on the table were to be used to bring our monsters to life. If that isn’t enough to get you excited on a Monday, I don’t know what is!

In addition to the monster creation station, another table had been visited by the “Mad Baker.” There were chocolates in the shapes of bats, ghosts, and monsters, as well as delightful little pumpkin bites! Those were quickly scarfed down by all in the Irvine office, with great thanks to the Mad Baker.

Throughout the week, the Mad Baker provided haunted yet delicious treats for the office—from Mini Mummies (tiny pigs in a blanket) to Eye of Newt (roasted chickpeas). Each treat was a complete delight. 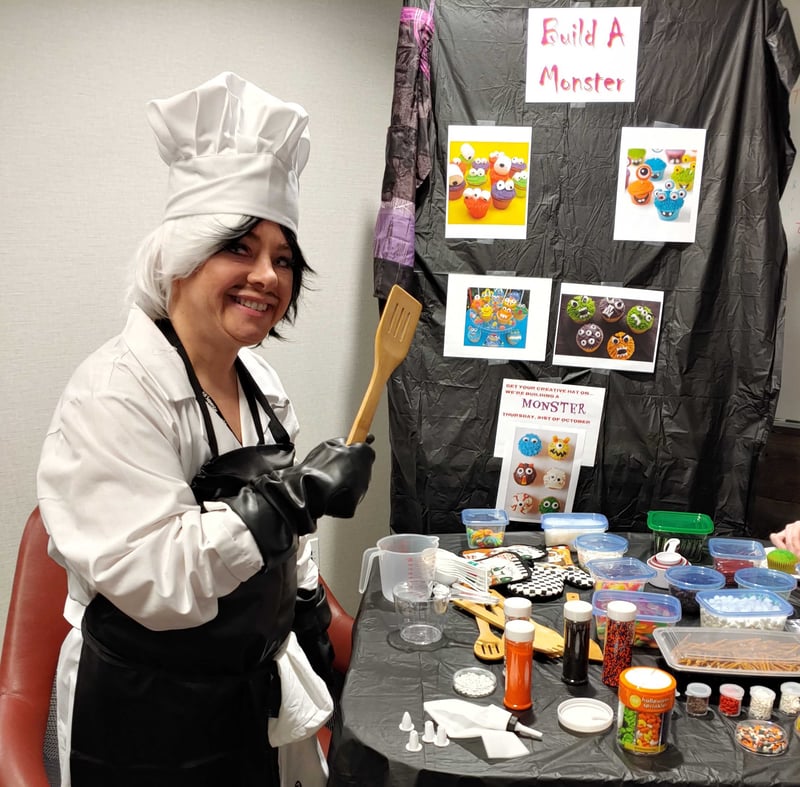 The day of Halloween arrived, and with it, immense excitement. It is always such a pleasure to see how pumped everyone gets to dress up and participate in fun Halloween activities around the office. This year was a banner year for creativity!

Upon my arrival into the office, I was met with a terrifying “zombie ex-wife” (an excellent reference to Mean Girls), and the entire cast of Parks & Recreation. We also had a smattering of Disney villains, from Hades to the faceless hunter from Bambi. 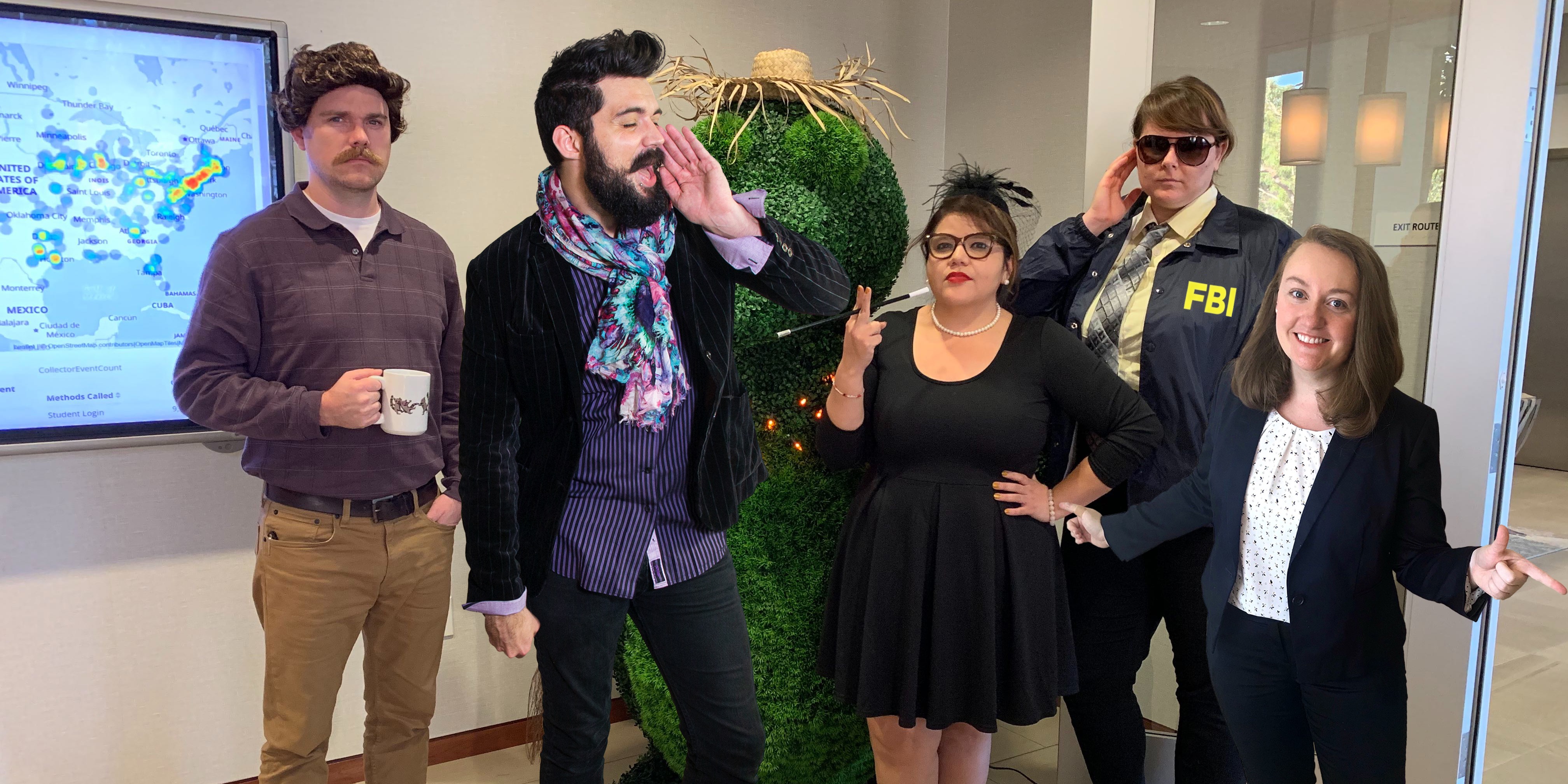 Part of the Engagement team dressed as characters from Parks and Recreation.

The Product team did an excellent job with their costume theme, which had to do with power and energy! There was an Energizer Bunny, the Flash, and Pikachu! It was so much fun to see how creative people got with their costumes. The Product Team as energizing, electrifying, and powering up the new ST Math.

Around mid-morning, the monster making cupcake contest began. A large group of us sat around the tables decked out with decorating tools and began creating monsters of all shapes and sizes. Katie created the minimalist “Mr. Bones”, which featured a tombstone and bones sticking out of the grass. Javier concocted a crocodile monster, complete with a pretzel stick jaw featuring candy teeth! This activity brought every team out and allowed us to compete and admire each other’s costumes and creations simultaneously. The Mad Baker and Sous Chef judged the cupcakes, and I won first place! My cupcake was named “The Scariest Monster of All”, which depicted the unfortunate demise of my productivity on Halloween, complete with tombstone. 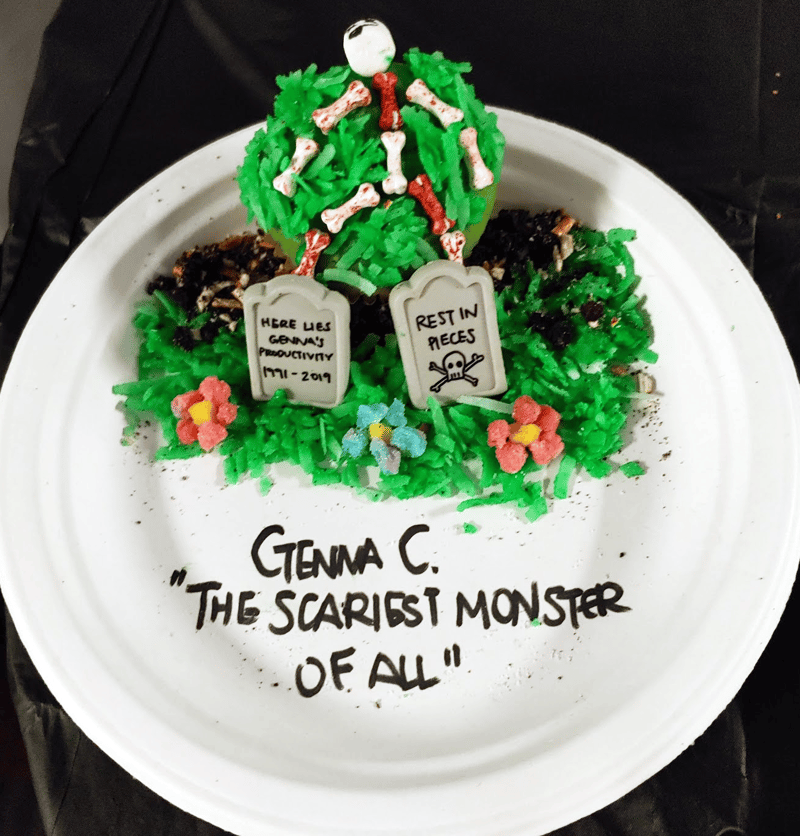 My winning cupcake, deemed “The Scariest Monster of All."

One of the best parts of holidays with MIND is getting the entire company involved, regardless of whether or not they were celebrating in the Irvine office. We had a costume contest this year on Slack, which allowed Irvine and remote employees to submit a photo of their Halloween costume. We were each allowed one vote, so the competition was fierce!

The Social Impact team, dressed as hikers, kept in character by going for an actual hike! The QA Team posing in front of our 20 Years of Innovation wall.

The celebrations weren't just for MIND employees. MIND pets also joined in on the festivities and elevated the holiday spirit by dressing in their best costumes.

Winnie as The Little Mermaid and Deacon the Penguin.

Raynor as a dinosaur, Nova as a giraffe, and Doug, the magical unicorn.

In the end, the detailed group costumes reigned supreme, and the Engagement Disney villains won! This Halloween was one to remember—between the haunted and delightful BOOs being shared all month long and the day-of festivities, MIND makes it easy to get into the spooky spirit! 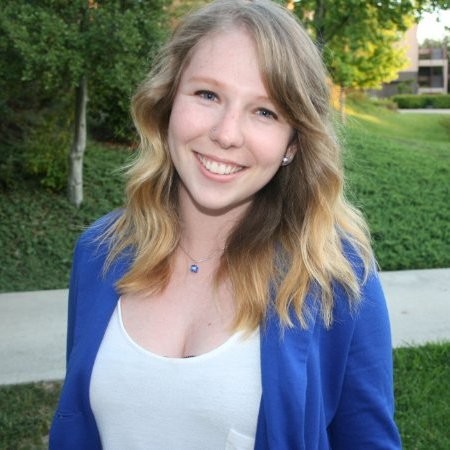 Genna Conrad is the Senior Partnerships Administrator at MIND Research Institute. She is an avid reader, dedicated cat-parent, and crews for her dad’s racecar in the Sports Car Club of America.