END_OF_DOCUMENT_TOKEN_TO_BE_REPLACED

Educator Perspectives: How to Bring Edtech into a District Successfully

By Brian LeTendre
In each installment of our Educator Perspectives series, we interview teachers and administrators across the country who are engaging, motivating and challenging their students in unique ways. We share their obstacles, successes and strategies so we can build a community better prepared to mathematically equip all students.

Kim Anthony is the Director of Curriculum and Instruction for Billings Public Schools in Montana. Billings began using ST Math at five of their schools in 2016, and have since gone on to expand use of the visual instructional program to nineteen elementary schools and one middle school. We recently spoke to Kim about her approach to bringing ST Math into the district, and what led to Billings having such a strong implementation.

Kim explained that ST Math first came to her attention through Phillips 66, who not only is a large employer in the area, but operates a large refinery in Billings that employs over 400 people. Phillips is a longtime supporter of ST Math and STEM education, and offered Billings Public Schools the opportunity to bring ST Math to their students.

“ST Math hit exactly what the school was already trying to do with math education in Billings Public Schools,” Kim explained. She was impressed with the research behind ST Math, as well as its focus on building deep conceptual understanding.

Find the Right Place to Start


Bringing any new program into a school or district successfully requires a thoughtful approach, and Kim had a clear strategy for how she wanted to introduce ST Math in the district. That strategy included starting with a handful of schools, and getting a strong commitment from both administrators and teachers.
“I chose five schools where I knew the principals were true instructional leaders, would be supportive of trying this, and had staff that would buy in,” she said. “If that principal is not in classrooms, if they don’t understand math pedagogy...it’s not going to work.”

In her teachers, Kim was less concerned about finding the strongest math instructors in the district, and more concerned with finding educators that had a growth mindset. “Were they willing to try something new?” she asked. “Because ST Math looks different than any other thing that we had ever tried.”

Kim also made sure the schools provided a mixture of socio-economic levels and test scores, in order to see the impact for all students. She then had those schools go through an application process in which administrators and teachers demonstrated an understanding of ST Math and a commitment to implementing the program.

In addition to the training that teachers received, the math coaches for elementary and middle school also went through training, as did Kim herself. As the five schools began their implementation, the math coaches provided direct support for teachers, including everything from onboarding students to assisting with classroom facilitation. That additional layer of support helped ensure a strong start with the program.

Some of the teachers quickly became champions for the program as well, quickly becoming well-versed in all aspects of ST Math and assisting their fellow educators in a variety of ways.

“One of the kindergarten teachers was a huge advocate for ST Math, and she had figured out how to do group lessons with it,” Kim explained. “I subbed her out and had her support other buildings for that grade level. It wasn’t just our math coaches but finding the champions within your building—teacher leaders who could go out and help.”

Once teachers were up and running with ST Math, the math coaches continues to provide ongoing support by identifying training needs as well as leveraging existing resources like the ST Math Central site. Math coaches regularly send emails to teachers with links to resources and posts from ST Math Central, based on what they think will be most helpful.

“We took the JiJi posters and put them in all of the classrooms,” Kim explained. Having facilitating prompts available for teachers helped them support students without reducing the rigor of the ST Math puzzles for them. 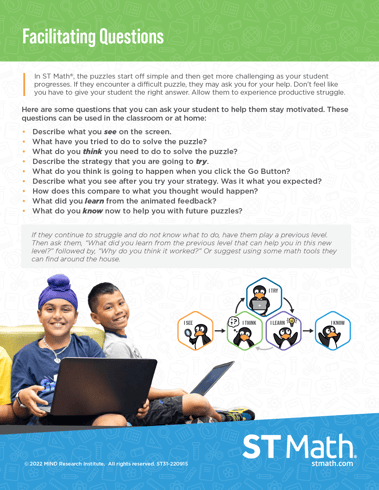 Kim also praised the ongoing support Billings gets from MIND’s Education Success team. “Anytime we’ve ever needed anything, they are so responsive,” she said. “The level of training we get is amazing. You don’t get that level of assistance from most companies.”

Share Successes Stories In and Out of the Classroom

It wasn’t long before word of ST Math’s impact started to spread through the district. “Our principals have to take their data before the school board and the other principals,” Kim told us. “They had to attribute what they did differently to get their schools to increase, and every one of them said ST Math. So all the other principals started thinking how they could get involved.”


Teachers and administrators weren’t the only ones talking, and the effect of ST Math was not limited to the classroom. “We got really good student feedback,” Kim explained. She recounted stories of kindergarten students applying lessons learned in ST Math to playground disagreements by asking themselves what JiJi would do in certain situations.

“The students would say things to the principal on the playground like ‘I know JiJi is all about math, but JiJi wants us to never give up and figure out the problem.’ They were not only carrying that over to other content areas, but to behavioral and social areas, and that meant just as much as the quantitative results.”

It wasn’t long before parents started talking about ST Math as well. “PTA parents came to us and were asking about the program because it was in other buildings,” Kim said. The PTA ended up funding the purchase of ST Math for the school in question.

Building a Foundation for Success


Bringing any new resource into a school district is a daunting task, as there are so many variables to account for, and challenges that rise up along the way. The thoughtful and strategic approach that Kim took to implementing ST Math in Billings Public Schools created a strong foundation for success. By identifying the right schools to start with, building in a strong training and support system, and sharing success stories, Kim has been able to ensure that students and teachers are getting the most out of ST Math.

Students Learn About Careers in Coding