END_OF_DOCUMENT_TOKEN_TO_BE_REPLACED

I’m a Title IX girl. Signed into law by President Nixon in 1972, it reads "No person in the United States shall, on the basis of sex, be excluded from participation in, be denied the benefits of, or be subjected to discrimination under any educational program or activity receiving Federal financial assistance.” I was 11 when the regulations became effective in 1975. Despite opposition to Title IX in the courts and inconsistent compliance on them, strong and talented female scholarship athletes began to emerge from the shadows and on to the center of courts, pools, fields and tracks in universities throughout the country. The words “athletics” or “sports” are never mentioned, yet the effect of Title IX on female athletes is remarkable. By 1978, I was nearly 6 feet tall and ripping down offensive boards at Olympian Nancy Dunkle’s summer basketball camp, one of over 100 girls with newly possible college hoop dreams. In 1982, the strong, talented female scholarship athlete nervously awaiting her first collegiate jump ball was me. 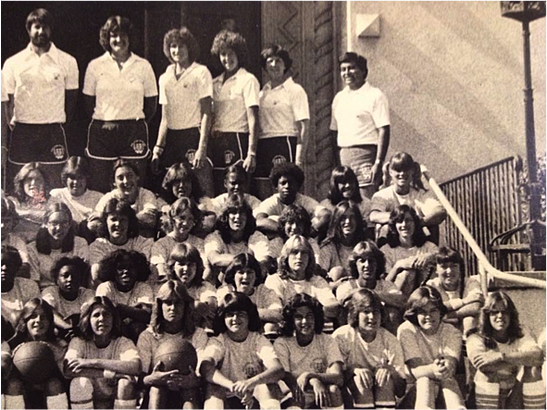 (Photo Caption: The author, center, in 1978 at Olympian Nancy Dunkle’s summer basketball camp, one of many sparked  by Title IX.)

On the 40th anniversary of Title IX’s passing, a White House press release stated that the number of female college athletes has increased from 30,000 to 190,000, and, not coincidentally, the proportion of female professors in science and mathematics has more than doubled. A study by the National Bureau of Economic Statistics found that women’s increased participation in sports leads to increased participation in the workforce and, particularly, in high-skill, high-wage fields.

I can attest to this. There is no way I would be equipped to lead a large staff, negotiate multi-million dollar partnerships or engage in highly visible public speaking and engagement opportunities had I not learned leadership skills, discipline, perseverance and teamwork from talented, caring coaches and teammates. Trust me when I tell you how effectively you learn to perform and adapt in high pressure, highly public situations when you are standing at the free throw line, down 2 in the final minutes of a play-off game! I have yet to encounter a business situation that can replicate that particular blend of adrenaline and nerves.

In the same way Title IX completely changed the landscape for girls in sports – it’s time for a full-court press on Girls in STEM – science, technology, engineering and math. Past myths and stereotypes surrounding girls’ participation in sports are still applied to STEM today. For example:

MYTH: Girls are not as interested as boys in playing sports (simply replace with math, engineering, science and/or technology today).

FACT: The dramatic increase in girls' and women's participation in sport since Title IX was passed in 1972 (by 560% at the college level and over 1000% in high schools) demonstrates that it was lack of opportunity – not lack of interest – that kept females out of high school and college athletics for so many years. Girls were also told that they were not as interested in law or medicine as men: today women thrive in these fields.

The true significance of Title IX, for all women and certainly for me, has been the increase in opportunities off the court. Bernice "Bunny" Sandler, who helped draft the legislation and now works as a senior scholar for the Women's Research and Education Institute in Washington, D.C., calls the law "the most important step for gender equality since the 19th Amendment gave us the right to vote." Achieving the same level of success for girls in STEM that was experienced by girls in sports is vitally important.

That’s why the organization I am blessed to work with, MIND Research Institute, is joining Million Women Mentors, an initiative started by STEMConnector. MWM’s goal is advancing women and girls in STEM careers through mentoring. MIND employs a large number of women in both STEM and non-STEM capacities, all contributing to our mission to ensure that every child is equipped to solve the world’s most challenging problems. Part of solving those problems is to help level the STEM playing field for every student – regardless of gender or ethnicity.

There are many other great organizations and associations, in addition to those already cited above, working hard to pave a smoother path for girls in STEM including the American Association of University Women, Girls Who Code, the Girl Scouts and many more.

Finally – there are these organizations – the ones I relate to most: Girlstart, Tech Trek, Camp Reach, G.A.M.E.S, and G.R.A.S.P. What do they have in common? They are all camps for girls – focused exclusively on imparting the power of STEM and encouraging girls to embrace their inner mathematician – or scientist – or engineer. Because I know firsthand how one simple little week at camp can change a girl’s life…..