END_OF_DOCUMENT_TOKEN_TO_BE_REPLACED

Here at MIND, we support the work of the United Nations as an organization who promotes universal human rights, including the right to education. We are inspired by the UN’s efforts to bring nations of the world together to solve global problems. 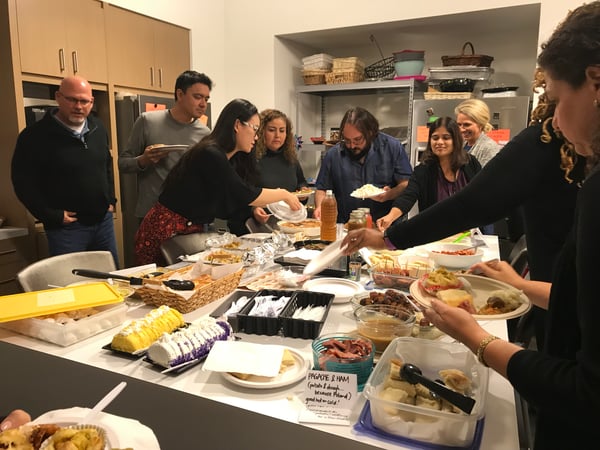 In celebration of United Nations Day, MIND held a potluck feast at our Irvine office, with several colleagues bringing in dishes that were tied to their family's history and culture. Here are some of the culinary creations, with a note as to why they were chosen:

Yvonne Noneman came up with the idea for the event, and brought a vegetarian version of the Greek dish Moussaka, a casserole with influence from the Ottoman Empire.  As for where she got the idea for the feast, Yvonne knew that nothing brings people together like food. "We have such varied backgrounds, but food is the one constant we all share," she said.

Here are a some of the other delicious contributions from MIND colleagues: 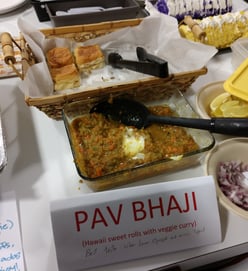 "Pav Bhaji is an Indian based hot ,spicy, flavorful dish served with crunchy onions and slivers of lime, coupled with butter-dripping, just-off-the-tawa pavs — so called street food favorite for good reason. Here is a tagline which you tend to hear if you miss trying this on your visit - Mumbai ke paav nahi खाया तो क्या खाया (Funny slang used to convey don’t miss on trying Pav when you are in Mumbai!)"--Shwetha Patil 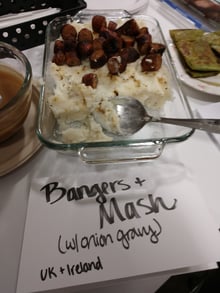 "I made Bangers and Mash. A good deal of my ancestry originates in Scotland, Wales and Ireland where the dish is enjoyed by all. When my families immigrated to the United States, they eventually settled in Texas where there is great appreciation for meat and potato based meals! So, for me, the dish conjures lots of warm, loving memories. The United Nations Day gave me the opportunity to express my Southern Hospitality and feed people food I love, which is one of my favorite things to do!"--Kari Applegate 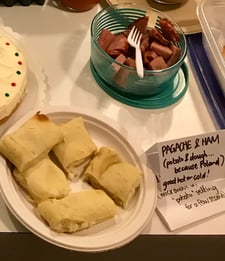 "I made Pagache and Ham, a Polish/Slovakian dish that my family has made for generations. It's simply mashed potatoes baked into dough (think a giant pierogi). My family always broke the slices open to put a piece of ham in, making a happy little Polish sandwich. I shared this with everyone because it is a favorite dish of mine that my grandmother makes, and there's nothing like Grandma's comfort food."--Genna Conrad 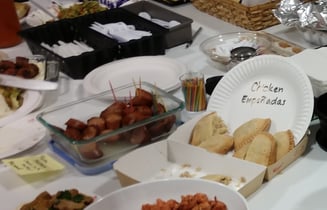 "I brought Polska Kielbasa, originating in Poland. My parents would make it periodically. United Nations Day was a great occasion to celebrate and learn about the diverse background and ancestry of my colleagues while coming together over something we all have in common: food!"--Calli Wright

"I didn't have time to cook, but Renzel was kind enough to pick up Chicken Empanadas for me, from Red Ribbon bake shop. A lot of Filipino food is derived from Spanish food (thanks to Magellan and the Spanish explorers). I especially like these from Red Ribbon because the crust is flaky and the filling is not greasy. They also have beef empanadas there!"--Jo Garrett 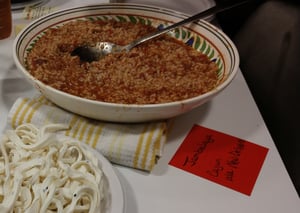 "My husband's culinary heritage is much more interesting than mine, so I chose to bring in Jambalaya - but I was nice and kept the heat quotient in the yellow-orange zone (I usually make it full-orange and have occasionally accidentally created a full red concoction) --Alesha Arp

"Quesadillas, the quickest snack in the west! Mexican states argue about which state has the best cheese, so at the border of most states there is a tourist spot for all to try the state cheese. Usually the best way to try them out is as a quesadilla."--Javier Mendoza (NOTE: The quesadillas went so fast we did not even have time to get a picture of them. But trust us, they were amazing.)

We are so lucky to have such a thoughtful group of colleagues at MIND, who take every opportunity to find ways to come together. Thanks to Yvonne Noneman and her wonderful idea that made this United Nations Day extra special!

How Coding Supports the Mathematical Practices