END_OF_DOCUMENT_TOKEN_TO_BE_REPLACED

Meet the Mastermind Behind an Innovative, New Way to Teach Math

Video produced by NationSwell in partnership with Cisco. This blog was orginally published on NationSwell and is reposted here with permission.

In elementary school, Matthew Peterson struggled mightily with math. When an instructor explained a problem, Peterson would be so focused on figuring out the language that he forgot the beginning of the question. In a traditional classroom setting, “If you couldn’t follow the instructions from the teacher, you were lost. You had no way to learn on your own,” Peterson, who suffered from dyslexia, says. It wasn’t until Peterson’s dad started drawing pictures to help his son visualize math equations that he had the breakthrough that turned him onto how exciting, creative and fun the subject can be.

Seeing his challenges in school as an opportunity to be solved, the boy who once hated math went on to study engineering, biology and neuroscience in college. From there, Peterson began to think as an entrepreneur — creating, innovating, problem solving and ultimately, transforming the way mathematics is taught in American schools.

To me, it’s not acceptable that so many students exit the school system afraid of math.

Starting with a summer research program in 1994, Peterson spent a decade working to prove that math could be taught without language, which can create a barrier to understanding the concept. This is true not only for kids who struggle with language like he did, but for any student since talking about math using words layers two completely different ways of thinking on top of each other.

That mission ultimately became the Irvine, Calif.-based MIND Research Institute and its ST Math program, a series of games starring JiJi, an animated penguin that introduces math visually. Students must figure out how to help JiJi get past a variety of obstacles (each representing an important mathematical concept) by building bridges, filling in holes, and so on. “It is very difficult to create software that will translate into improved test scores,” Peterson, MIND’s co-founder, says. “People have been trying to do that for many years, and there is very little to show for it. But there is a very consistent result that games, especially visual games, can build spatial-temporal reasoning. What our approach does is build spatial-temporal reasoning, and then connect that spatial-temporal reasoning to mathematical understanding,” accomplishing what other software companies haven’t. In fact, schools that fully implement ST Math see up to three times growth in math proficiency.

Alex Belous, education portfolio manager for the Cisco Foundation (which has supported MIND Research Institute since 2004), says that when he initially reviewed their program, its installation and training strategy was predominantly in-person, which wouldn’t scale. “It was an ideal partnership, as we were able to assist with their conversion to a web-based and more scalable delivery method, adding courses and grade levels, as well as creating a teacher-dashboard that allows them to see where students are most challenged and give them relevant help to keep learning,” Belous says. “We’re proud to be part of something that is providing large impact and pleased that ST Math is likely to scale much further in the next five years.”

The United States lags behind other nations in math and science performance, ranking 29th in math and 22nd in science, according to the Program for International Student Assessment. By harnessing the power of the digital revolution, MIND Research Institute and Cisco are able to address this problem and prepare young people to succeed in science, technology, engineering and math fields that are critical to economic growth and global competitiveness. 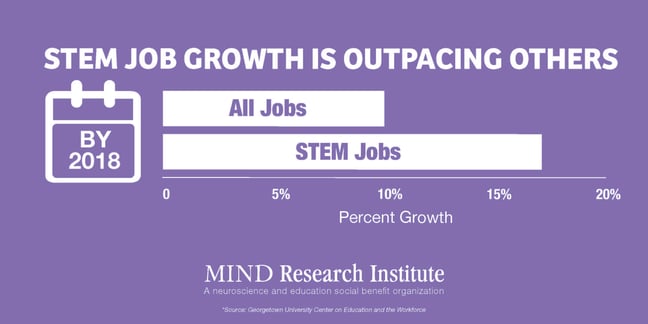 Source: Georgetown University Center on Education and the Workforce

That formula has proved to be remarkably — and consistently — successful. When MIND’s ST Math software launched, only 12,000 students used it. Today, the program reaches more than 1 million children in more than 3,000 schools across 45 states (including about 70 percent from traditionally underserved backgrounds). In the U.S., only 30 percent of kids leaving middle school are proficient in math. Impressively, students’ math proficiency has doubled or even tripled when using ST Math. “It’s not the students who are incapable of learning, it’s the environment,” Peterson says, going on to explain how the software creates a setting where students from all backgrounds can not only become skilled in math, but learn to enjoy it. 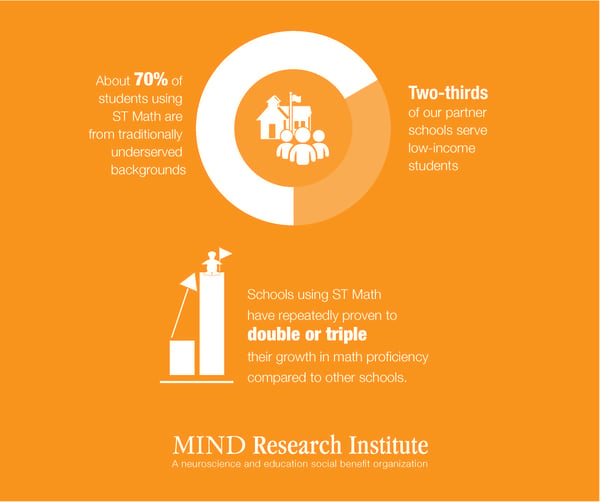 About 70% of students using ST Math are from traditionally underserved backgrounds.

Many people have this misconception that experiences are fun, but learning isn’t really an experience,” says Brandon Smith, MIND’s lead mathematician. A lot of learning software essentially takes the approach of designing a fun game and then trying to shoehorn some math into it, Smith explains. MIND’s games are designed from the ground up to focus on core math principles. They’re entirely visual, and feature deliberately simple animation. “We don’t want you to be distracted by anything that is not the heart of the matter,” he says.

The result? A fun game where simply uncovering what the next puzzle is teaches kids the underlying concept. It also educates them on how to approach unfamiliar problems, how to think creatively and how to persevere and keep working on something difficult. ST Math enables students to learn at their own pace by giving immediate, personalized feedback on every answer — something that’s only possible using software, Peterson says.

Another positive outcome of ST Math is that girls often find more success with it than boys: an uncommon result among math programs. In the U.S., women are underrepresented in science and engineering fields (representing just 29 percent of the workforce compared to 46 percent of all workers), but programs like ST Math can generate the confidence and enthusiasm for girls to pursue jobs in those industries.

Technology not only makes that kind of learning possible in one classroom, it makes it scalable to thousands of them. “It’s not enough to just do a research program to prove that something is effective,” Peterson says. “If you want to change the world you have to make something that is scalable.”

“People use the term ‘innovation’ so often in Silicon Valley, but it is actually extremely rare to come across something that is truly revolutionary and actually effective and scalable,” Cisco’s Belous says. MIND’s technology demonstrates how the potential to scale and replicate is necessary for a solution to be sustainable and successful at addressing social challenges. Not only does ST Math transform math education, but also it has the potential to be applied in many other areas of education.

This completely new, non-language-based approach has the ability to capture every mouse-click of every child to see where kids are most challenged and refine the games appropriately to make them even more effective. It is fantastic for math education and student outcomes, but the fundamental innovation could potentially be applied to a far wider set of subjects.

MIND’s games certainly have the potential to revolutionize how young children think about themselves. Studies show that most American students possess what’s known as a fixed theory of intelligence: a belief that “intelligence is something that you’re born with,” Peterson says. That mindset can hold kids back from learning math because they think if you can’t solve a problem, you’re not good at it. The kind of self-directed learning in ST Math reinforces the principle that when you stick with a problem, you get better at it.

Lisa Solomon, a principal at Madison Elementary School in Santa Ana, Calif., sees that tenacity in her students. ST Math software is used at three area schools, including Solomon’s, where nearly 100 percent of students are Hispanic and about 90 percent qualify for free or reduced-cost lunches. “It’s helping us to see what our students really can do,” Solomon says.

These days, when the growing opportunity divide reveals the sheer importance of a strong education, MIND Research Institute not only levels the playing field, it helps struggling students bound to the head of the class and achieve their greatest potential.

4 Changes This Teacher Made to Boost Student Motivation

Math, Food and Community: Interview with Taste of Math Co-chairs