END_OF_DOCUMENT_TOKEN_TO_BE_REPLACED

Research-based Benefits of Math and Music for Early Learners

By Vivian Doughty and Manjari Patel

How does exposure to music impact math development in young learners?

For example, when a baby starts to cry, a mother’s natural inclination is to pick up her baby and start the soothing process by gently patting the baby’s back or swaying and singing.  The baby internalizes this rhythmic pattern of patting and singing and may begin to sync her breathing or thumb sucking to the rhythmic beats.

Therefore, the notion that musical ability is something that you’re born with is a valid notion because we’re ALL born with it!

You may have early musical memories of your grandmother singing you lullabies in her native tongue, your father rocking you to sleep, or your sister singing nursery rhymes loudly to pass time in the car.

Turns out, there are solid scientific benefits to incorporating music in our young children’s lives. A sampling of a few studies on the benefits of music:

Music and math: An interesting study conducted on early learners sheds further light on this subject matter.  Kids ages 3 and 4 were taught math activities with music (experiment group) and without music (control group) and later asked to recall what they had learned.  The experimental group presented a detailed account of what they were taught, not even realizing they had been taught math concepts (Geist & Geist 2008; Southgate & Roscigno 2009) versus the control group who struggled with recall.

Music and the whole brain: Most people think musicians are “right” brained, the side we think of as being creative. However, musical ability requires the use of both sides of the brain, the left and the right.  Musicians use a process called “divergent thinking” in which the left and right sides of their frontal cortex are more heavily used than the average person (Gibson, Folley, & Park 2008).

Music and problem solving: Gibson, Folley, & Park (2008), tested 40 Vanderbilt University students (classical music students and non-musicians) to measure their problem-solving abilities. In the study, both groups were given a variety of ordinary household objects, asked to make up new functions for them, and then given a written word association test.  Musicians came up with remarkably more novel uses of the items, and scored more correct responses than the non-musicians on the word association test. Researchers believe this may be attributed to musicians’ enhanced verbal ability, and greater activity of both sides of their frontal lobes (divergent thinking).

So how can those of us with young children make music part of our daily routines?

Young children love to make music, and you don’t need expensive toys or real instruments to let them get started. They can bang wooden spoons on pans, and shake uncooked rice or noodles in small plastic containers. 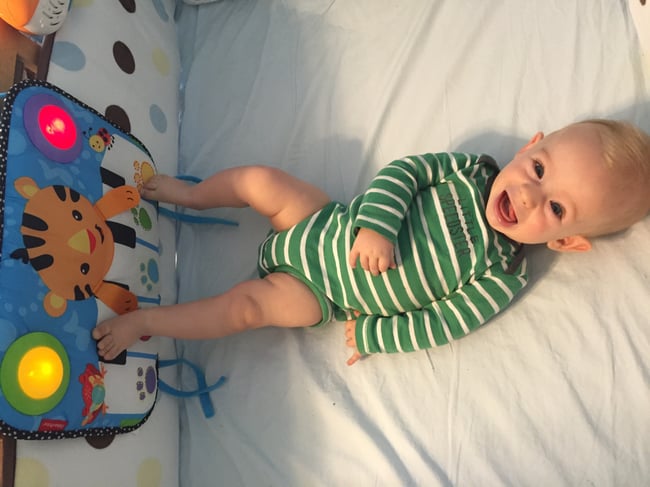 You can even start teaching piano basics to very young children, fostering their musical and other brain development from the get-go.  Use an acoustic piano, an electronic piano keyboard or an app, like the iGrand app on the iPad. Try one of the following musical activities with your youngster:

To support the index finger, touch your thumb to the first knuckle of the index finger. This creates support so that finger won’t collapse while touching and playing piano keys.  Your young child will gravitate toward using the index finger, so using the thumb in addition will help your child build finger strength.  Don’t worry about using all fingers in the traditional fashion right away.

Create a rectangular cutout ½” x 1” with colored paper. Tape or place the rectangle on a piano key. Starting with your hand raised above the rectangle, practice slowly dropping your arm until the supported finger rests on the rectangle.  Repeat with your youngster. Expand on this game by assigning all the piano keys different shapes and colors.

When your early learner is first interacting with a piano keyboard, try not to worry too much about the usual rules regarding the instruction of piano performance.  Your child will likely pick up on your piano technique simply by watching your interaction with the piano. Your child may soon emulate your raised wrist, lifted fingers, relaxed shoulders, good posture, relaxed demeanor and enjoyment.

Share other ideas for how you incorporate music into your youngsters’ lives in the comments section below!

Off the Number Line: Nothing Sacred