END_OF_DOCUMENT_TOKEN_TO_BE_REPLACED

How One Little School Got Big on Personalized Learning

La Escuelita is literally a “little school” in Oakland, California, serving a small but diverse population. Part of the nation’s “small schools movement,” the Title I campus is nestled in a new, eco-friendly building on the lip of Oakland’s Lake Merrit, and serves 358 transitional kindergarten through seventh grade students, more than 90% of whom qualify for free or reduced price lunch.

The school is rich in technology, with two computer labs and laptops carts. Despite this, the school had not quite figured out how to leverage technology for personalized learning. That is, until they introduced ST Math.

“ST Math is how we first saw kids could take ownership of their learning,” says Kerri Frederick, who manages the schools two computer labs. With more than 20 years of experience using computers in the classroom, Frederick says, “This was really the first program I’ve encountered where the activity structure works for the kids. I love that they’re not distracted by candy or points. It’s simple and it works.”

As the games sustained students’ engagement and allowed them to work at their own pace, ST Math freed the teachers to pull aside small groups and work on specific concepts or troubleshoot challenges. “ST Math really introduced La Escuelita to personalization,” says Frederick.

Despite its small size, La Escuelita has become an ST Math powerhouse in Oakland, where 13 of 54 elementary schools currently implement the program, thanks to a public-private partnership between the district and the Rogers Foundation.

Fourteen more of Oakland’s elementary schools are on a waiting list for ST Math. “There’s been lots of word of mouth,” reports Robin Lovell, the elementary mathematics coordinator for Oakland Unified School District. Teachers from all of Oakland’s ST Math campuses have come to visit La Escuelita to see first-hand how the students use the program, and gain ideas for how best to leverage the program back at their home campuses.

“ST Math,” says Lovell, “is the only online program we absolutely love.”

Lovell is currently developing a way to measure ST Math’s impact based on the district’s three annual benchmark exams, which are built into the custom math curriculum that the district developed in collaboration with more than 350 of its teachers. The insight will not only help verify the efficacy of ST Math, but give the schools greater insight in how to implement it.

"They never wane in their joy of bringing that penguin across the screen,” Frederick adds, referring to the animated penguin JiJi who accompanies students through the games. 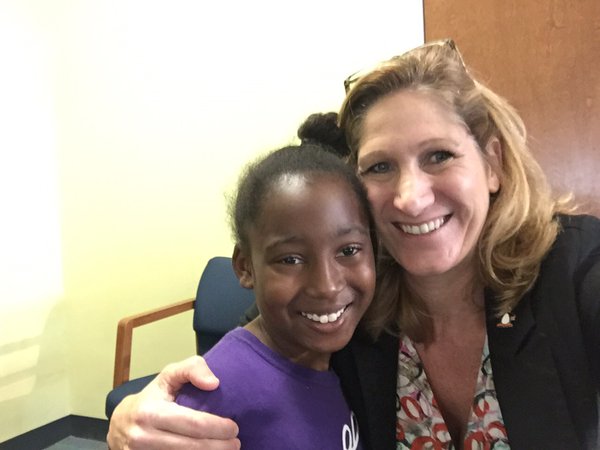 Aniya loves ST Math and can't wait to use her STEM skills as a doctor!

Back at La Escuelita, the impact is immeasurable but very real for student Aniya, who was recently interviewed by Cisco, a major funder of ST Math. “What I like about ST Math is that you can learn new ways to do things and you can also have fun at the same time,” she says. “It’s important to learn math because when you grow up, math is going to be all around you. Math is really important in the world.”

Read more about how schools are implementing teachnology for personalized learning: